The liver humanized FRG mouse is a robust model showing high engraftment with human hepatocytes. Compared to uPA-SCID, the FRG mouse is healthier since the effect of Fah knockout can be postponed until the mice are weaned, whereas uPA overexpression already occurs in utero. After repopulation, liver humanized FRG mice were infected with either HBV or HCV. Both viruses were able to infect the animals and lead to a chronic infection stage. Treatment of the animals with the currently available antivirals showed a reduction in viremia in animals infected with HBV or with HCV. This shows that the liver humanized FRG mouse model is able to support the replication of hepatotropic viruses and can be used to test novel therapies in vivo. 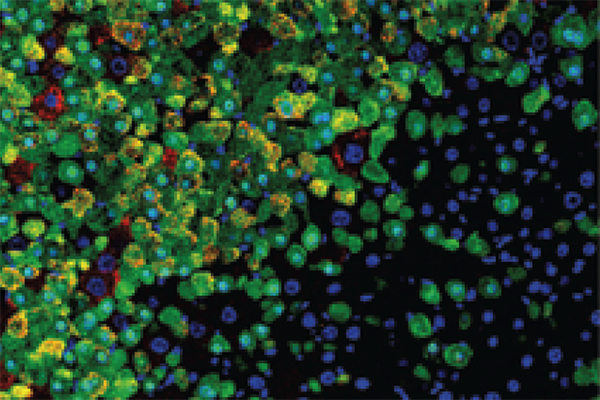 There is a pressing need for safe and highly effective Plasmodium falciparum (Pf) malaria vaccines. The circumsporozoite protein (CS), expressed on sporozoites and during early hepatic stages, is a leading target vaccine candidate, but clinical efficacy has been modest so far. Conversely, whole-sporozoite (WSp) vaccines have consistently shown high levels of sterilizing immunity and constitute a promising approach to effective immunization against malaria. Here, we describe a novel WSp malaria vaccine that employs transgenic sporozoites of rodent P. berghei (Pb) parasites as cross-species immunizing agents and as platforms for expression and delivery of PfCS (PbVac). We show that both wild-type Pb and PbVac sporozoites unabatedly infect and develop in human hepatocytes while unable to establish an infection in human red blood cells. In a rabbit model, similarly susceptible to Pb hepatic but not blood infection, we show that PbVac elicits cross-species cellular immune responses, as well as PfCS-specific antibodies that efficiently inhibit Pf sporozoite liver invasion in human hepatocytes and in mice with humanized livers. Thus, PbVac is safe and induces functional immune responses in preclinical studies, warranting clinical testing and development.

PUT OUR EXPERIENCE TO WORK FOR YOU

Talk to a Yecuris Scientist